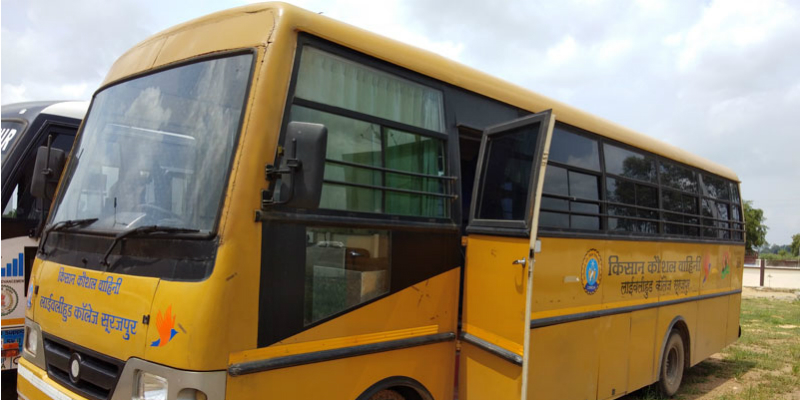 A mobile classroom for farmers in Surajpur district is improving lives

Agriculture is the backbone of any civilization. Food is a basic need of the people and the farmers fulfill this basic need. Despite providing such a significant contribution to the society, the farmers in our country, barring a few regions, have to live in poverty. Many farmers follow the age old methods of agriculture and this results in low productivity and low profit. Thus they have to either live in poverty or to give up agriculture in order to pursue some other means of livelihood. In order to change this scenario, various schemes have been adopted in the country. Chhattisgarh is one of the states where the government has been adopting some innovative measures to improve the condition of the farmers.

Every morning a bus leaves from the campus of Livelihood College, Surajpur. The bus travels to various places of the district. This is no ordinary bus though. It has an in-built classroom, a multimedia screen and other facilities. These facilities are for farmers who want to learn advanced methods of agriculture. In short, it is a mobile, state-of-the-art class room for farmers. This bus, named as the Kisan Kaushal Vahini, is a unique project by the Surajpur district administration.

The Kisan Kaushal Vahini travels to various parts of the district to provide training and support to farmers. The trainers conduct training sessions in the mobile classroom where the farmers can learn advanced methods of agriculture. The biggest revenue villages are being covered at this moment by the bus. The bus is parked at a place where farmers can come and access the training sessions. They are given training on various aspects of modern farming like fertilizers, dealing with pests and weeds, increasing productivity etc. They are also shown videos on various topics. The videos serve as tutorials and those are very popular among the farmers.

The farmers are also highly enthusiastic about the bus and every day they wait eagerly for the Kisan Kaushal Vahini to arrive at their place. Initially the bus is covering big revenue villages only but there are plans to expand it to the entire district. Farmers in those areas which are not yet covered by the bus are also seeking the expansion of the service to their regions. The district administration officials are confident that they will be able to add more features to the Kisan Kaushal Vahini in the future.

The Chhattisgarh government has been supporting the farmers through various schemes. The Kisan Kaushal Vahini initiative is one major step in this direction which has been very successful so far. The mobile classroom has become an integral part of the lives of the farmers in Surajpur. This can be an ideal model to follow for other states too.