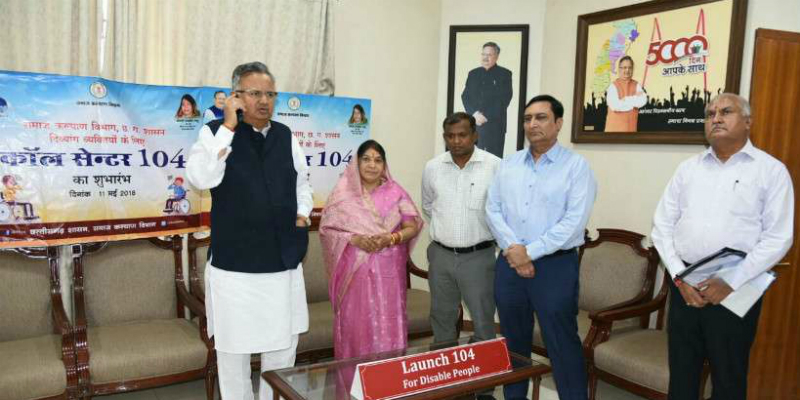 4.89 Lakh people in Chhattisgarh have been benefited from Mukhyamantri Pension Yojana

Chhattisgarh government has launched the Mukhyamantri Pension Yojana for about 4.88 lakh people deprived of the benefits of various pension schemes of social security. This is the first year of this plan. For this, provision of 200 crore rupees has been made in the first supplementary budget of the current fiscal year 2018-19. The beneficiaries will be given pension at the rate of 350 rupees per month. This scheme is in addition to the ongoing national and state pension schemes.

According to official statistics, on the basis of the poverty line survey list of the year 2002, about 16,21,000 beneficiaries were getting benefit of different social security pension schemes. According to the socio-economic-caste census of Central Government 2011, out of the beneficiaries of various pension schemes prevailing in Chhattisgarh, nearly 4,89,000 beneficiaries are deprived of the benefits of old age pension and widow pension. On the instructions of Chief Minister Dr. Raman Singhthe Mukhya Mantri Pension Yojana has been started for the benefit of these people from April 1 this year. Under the scheme, the pension amount is deposited online in their bank accounts. If an applicant does not have a bank account, they have to open an account immediately after the application is approved. The officers of the Social Welfare Department fully assist them in this work.

Social Welfare Minister Ramsheela Sahu also reviews this new scheme regularly. On his instruction, the Department of Social Welfare has sent the relevant rules of the Mukhyamantri Pension Yojana 2018 to the concerned officers of the state from the Ministry.This circular has been issued to all the District Collectors, Chief Executive Officers of District Panchayats, Joint and Deputy Directors of Panchayat and Social Welfare Department, Chief Executive Officers of District Panchayats and Commissioner of Municipal Corporations, Municipal Corporations of Nagar Panchayats and Municipal Corporation Officers. Referring to the main principles of the Indian Constitution in the circular of the Social Welfare Department, it has also been said that in the seventh Schedule of the Concurrent List of the Constitution on Social Security and Aging Pension, it has been done in item 23 and 24. In line with these guiding principles, the Chhattisgarh government has started the Mukhyamantri Pension Yojana 2018 under the social security programme from the current financial year 2018-19. Based on the survey list of Social, Economic and Caste Census 2011, this scheme has been targeted for senior citizens, widows and abandoned women.

According to the prescribed eligibility for the Mukhyamantri Pension Yojana 2018, the person has to be a resident of Chhattisgarh, widow of 18 years of age or above or an abandoned woman to get the benefit of it. The beneficiaries have to apply for this in the prescribed format. The format of the application form will be printed by the district panchayats for rural areas and will be given to the village panchayats. The applicant will collect his form from his Gram Panchayat office and submit the same, whose receipt will be given to him. After scrutinising these applications by the Gram Panchayat, these will be sent by the district panchayats with their views within a week. Officials also said that the format of the application in urban areas will be given to the applicants by the municipal corporation, municipalities and panchayats printed on their level.

The applicants will apply with the filled upthe form from the urban bodies and deposit the same. All applications will be lodged online on computers in the offices of the district panchayats and urban bodies. Applicants will be able to apply directly online if they wish. In the event of not getting the printed application form, application on plain paper in prescribed format can also be used.