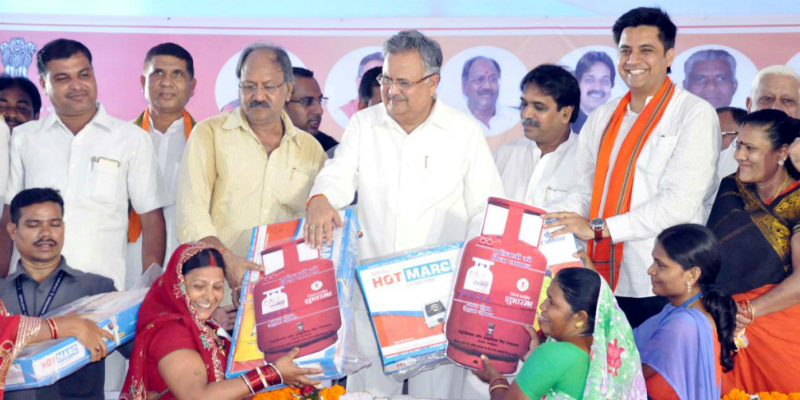 16.5 Lakh women got rid of the smoke when the Ujjwala Gas reached their kitchen

Until two years ago, the kitchens of many villages used to be drenched with smoke. This smoke had a bad effect on women's health. But the Ujjwala Yojana has changed the scene in Chhattisgarh. After this, the use of LPG gas in the state increased rapidly. After the formation of the state, in 2003 only 6,80,000 families had LPG connection, while today, 36,38,000 families are using it today. Under the Ujjwala Yojna, the coverage of Chhattisgarh increased from 34 percent to 65 percent. It has changed the lives of the women of the state.

Earlier, the women of the village used to go to the forest to collect wood for fuel. They used to spend one to two days of the week doing this work. As soon as the scheme started on August 13, 2016, the change in the state was evident. At that time there were 19,35,000 gas pipe connections. Then a gas connection was issued in the name of 16,35,000 women of poor families. When people came to know that the Central Government is providing free gas connection with a subsidy of 1600 rupees, they started applying for it. In view of this, the state government also moved two-step forward and offered a double burner fireplace for a price of 200 rupees. Also provided subsidy for the first refill. That is, a subsidy of 1500 rupees is being given to every beneficiary of this scheme by the state government.

The government has provided gas connections to 10 lakh women under the scheme in 2016-17, with subsidy of Rs. 153 crores were borne by the Government. After one year, a target of providing connection to 15 lakh women was set. Against this six and a half lakh women were provided with gas connection. The number of distributors were increased to ensure the availability of the cylinder on time. Today, there are a total of 413 distributors. In the first phase, 50 distributors have been appointed for inaccessible areas. They have now issued 7,525 connections.

The department has also taken up various tasks related to the conservation of consumers. Over the past 14 years, the number of full-time District Consumer Forums has increased to 12. Namely, Raipur, Bilaspur, Durg, Bastar, Rajnandgaon, Raigad, Sarguja, Korea, Kabirdham, Korba, Dhamtari and Janjgir. Similarly, the number of part-time forums is 15. Before this, there were 11 full five as well as part-time forums. Similarly, in view of the interest of the consumers, it has been added to the online service by Dudang for the convenience of the weights and weighing devices used by the businessmen of the state.

Chhattisgarh's largest production is paddy. It must be known that even the Central Government has appreciated the procurement of rice in the state. PMI Award, National e-Governance Award, CSI Nihalant Award, e-Agriculture Award and Manthan Award has also been received in 2008. Paddy acquisition volume has increased steadily at the support price. Before that, the number of paddy production centers in the support price in 2003 was 1,323, which was increased to 1,992. Similarly, the number of farmers selling were 9 lakhs which is now 13,28,000.

A total of 39,61,000 metric tons of paddy was purchased and rupees 2,130 crores was compensated for the farmers. In the last 14 years, 7,547 crores of rupees have been paid to farmers by purchasing 6 million 96 lac MT of paddy. After this, considering the inconvenience caused to the farmers, the government introduced Core Banking, which means that now the farmers do not have to stand in long queues to take money, but the amount is directly transferred into their account. Custom milling was also computeried to bring transparency in paddy procurement, which proved to be the first such innovative effort in the country.